A "Normal" Summer At The Shore

A "Normal" Summer At The Shore

Everything’s fine at the Jersey Shore. Things are normal. Bobby DiPeso is manning the day-shift headset at the Boardwalk squirt-gun game and touting the virtues of the Abby Cadabby plush doll as a prize, while four people dig in and squirt, one with a Bryce Harper Phillies T-shirt.

The usual, in other words. Because this summer, things will be back to normal after a 2020 summer of coronavirus restrictions, fears, lockdowns, crowds, confusion, and political animosity. Right? That’s the calculus. Normal. Trump T-shirts are on clearance; the westbound Atlantic City Expressway is already backed up with Pennsylvania plates on a Sunday afternoon.

“Abby doesn’t want to leave! Abby wants to stay here. So pretty!” DiPeso, owner of Bobby Dee’s Casino Arcade at Schellinger and the Boardwalk, holding his own in the shadow of the mighty Morey’s Piers across the way, is multitasking.

The Abby doll gets handed off as a prize, with no replacement Cadabby plush dolls certain in the pipeline. “Last year we couldn’t get a bicycle,” says DiPeso, who sports an M.B.A. from Temple on his arcade-owner resumé. “This year, it’s plush.”

And with most rentals throughout the Shore already booked solid, the real estate market sky high, restaurant reservations evaporating, along with masks and other buzz-kill restrictions, July 4 fireworks and outdoor music festivals back on the calendar, even a $4.7 million restroom renovation complete on the Atlantic City Boardwalk, the Jersey Shore is hurtling toward its traditional start of summer, Memorial Day Weekend, with very high expectations. 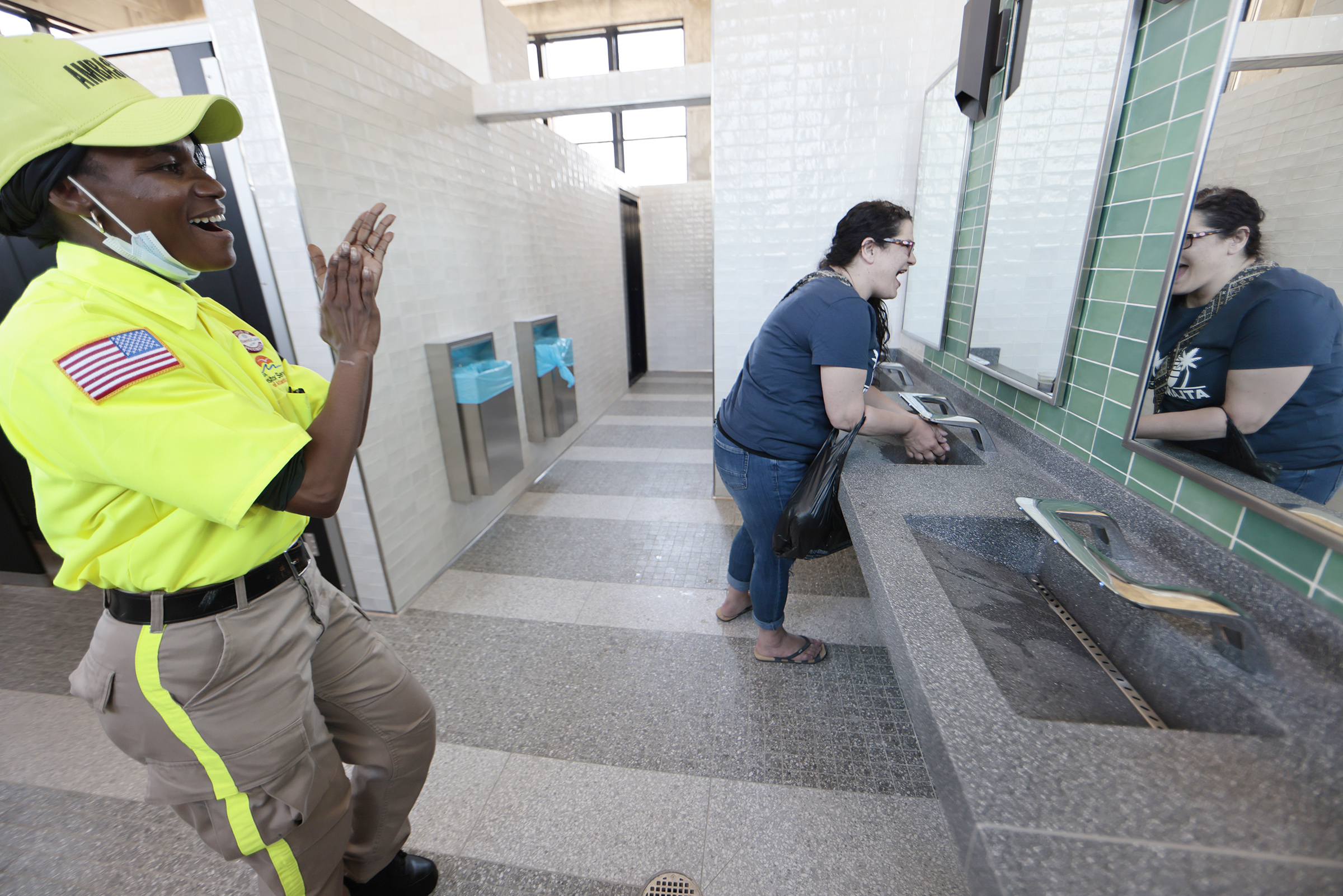 In truth, a lot of the Shore, both businesses and eager vacationers, have already left the starting line.

“For me, business is very good, year-round,” said Roberto Gonzalez, who has owned Comercial Mexicana, a grocery store with a restaurant and takeout business in the back on New Jersey Avenue in Wildwood, for two decades. Gonzalez and his wife, Cielo, also own the Sock N Roll Laundromat next door. “This year is better,” he said. “We sold more hot food.”

Comercial Mexicana’s reputation for exceptional food is only growing, with new customers showing up from Facebook and Google searches, reaching both a local year-round customer base and an enthusiastic taco-seeking summer crowd, he said. “We can’t complain,” Gonzalez said. “Everything is fine.” 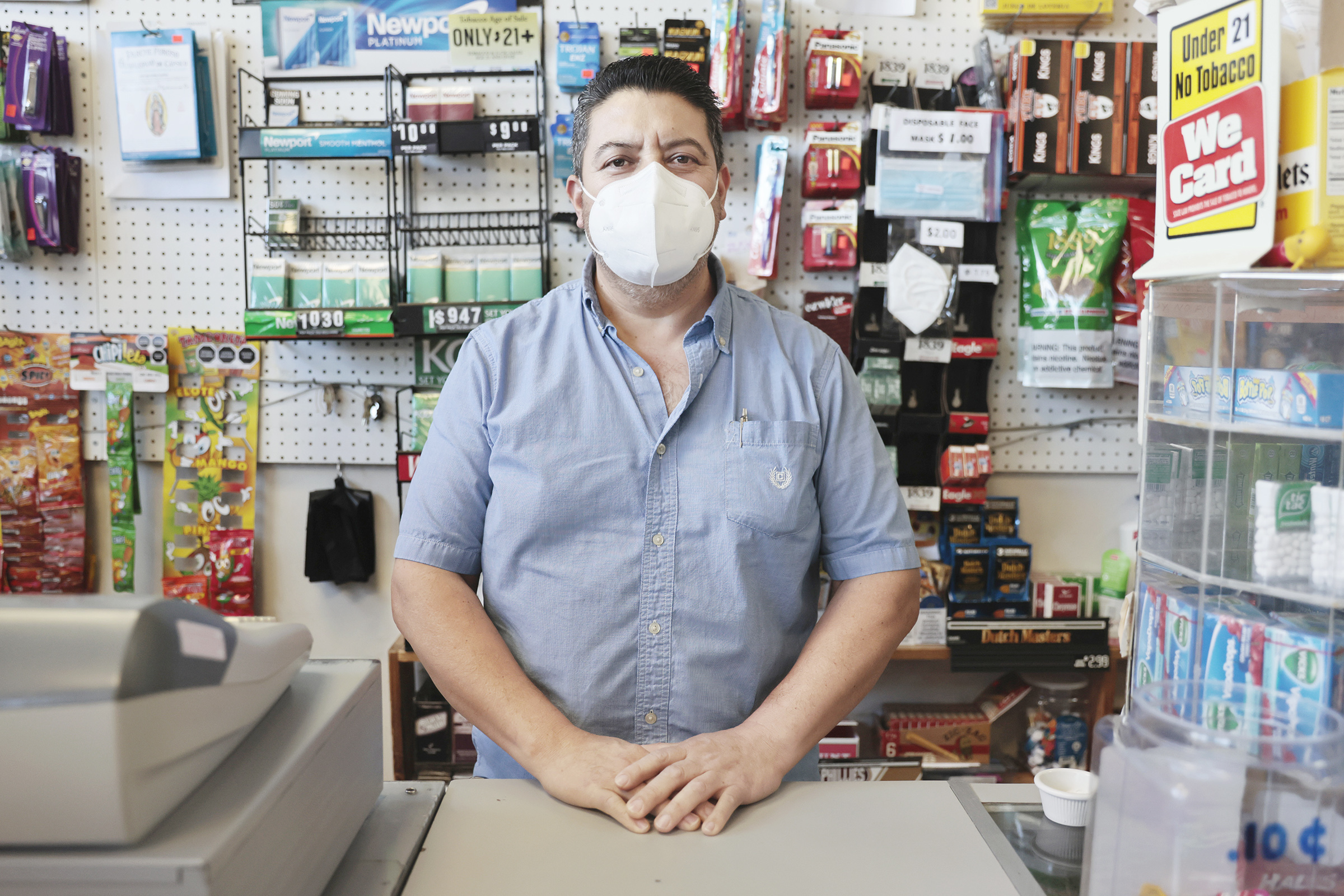 Roberto Gonzalez at his Comercial Mexicana Grocery and Deli, 3806 New Jersey Ave. in Wildwood on May 14, 2021. Gonzalez says his year-round business, including his popular prepared food, has been steady throughout the pandemic.

For some business owners, the pandemic summer turned into an unexpectedly robust fall and even winter.

‘We’ve been rocking and rolling since March,” said Jamie Hoagland, marketing director for the Tennessee Avenue Beer Hall complex in Atlantic City, where outside space, a fire pit, and a tent played well in a pandemic. “We have a dozen wedding receptions and rehearsal dinners booked for this fall.”

‘People are starting to get antsy’

Beamon is hoping a more relaxed mask situation this summer will free people to concentrate on what used to be the most pressing issue at Bobby Dee’s: aiming your squirt gun. “People are starting to get antsy about no mask policies,” Beamon said. 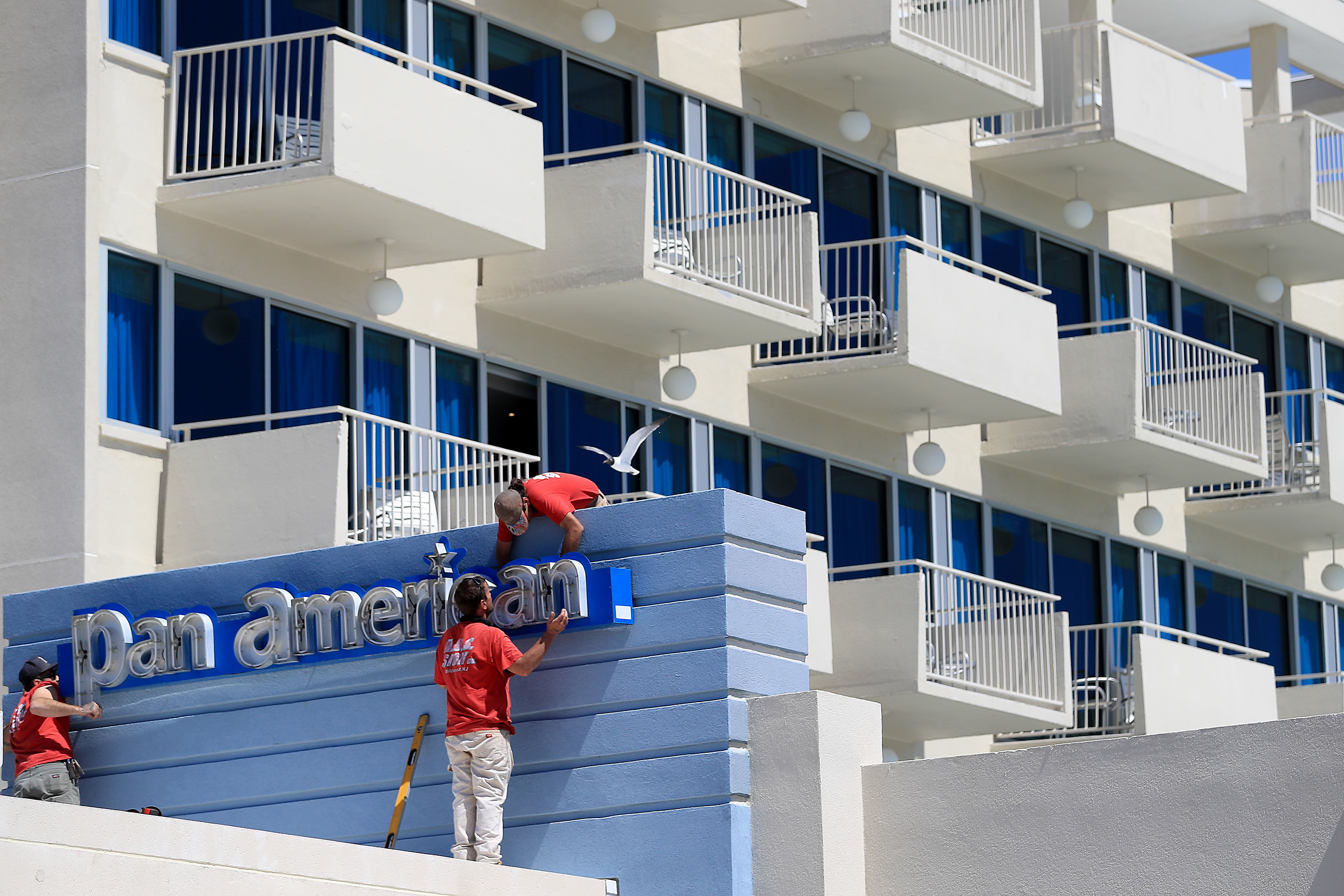 Ryan Nardy (left) Joe Cenite (center) and his son, Joe Cenite (right), all of A.B.S. Sign Company, hang the refurbished sign for the Pan American hotel in Wildwood Crest, N.J. on May 13, 2021.

On the night mic shift, figuring out how to lure people into the throwback corner arcade, keeping the competition on the squirt guns lively, families and kids happy, plush prizes headed back on the Boardwalk, Beamon says he’s in it for the love of the job.

He understands why there’s a hesitancy among some people to jump back into these summer jobs after a year of lockdown.

“The downtime has allowed them to self-evaluate, examine their value to the employer vs. the value of the employer to them,” Beamon said. “It’s kind of a job satisfaction vs. what you’re willing to accept pay-wise. I have teenagers working that make more hourly. I work so many more hours than them. That’s the only way.”

Staffing has indeed been a concern all over the country, but at the Jersey Shore, the labor shortages are creating some early panic among merchants gearing up for a three-month season. 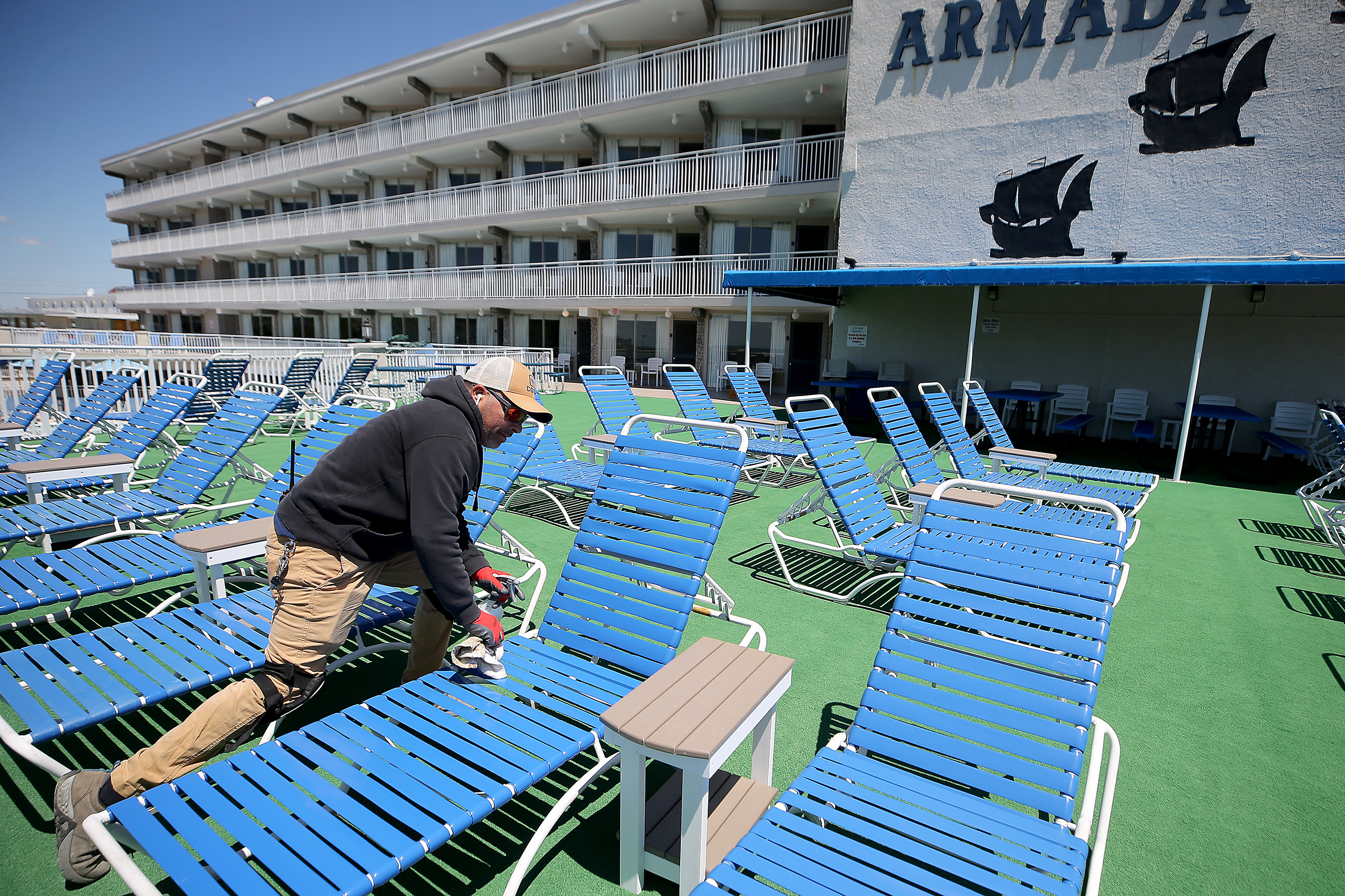 Wilfredo Crespo cleans the chaise lounge chairs on the deck of Armada By the Sea motel in Wildwood Crest, N.J. on May 13, 2021.

Gonzalez, like many Shore merchants, employs family members and is not worried about staffing shortages.

DiPeso, too, is relying on his wife, his son, his son’s wife (who was originally an international student who came to Wildwood on a J1 Visa), and Nick Beamon, their star on the nighttime squirt-gun MC rotation. Local kids who might have ventured out for a Boardwalk job are working at family-owned restaurants or motels. Juggling duties of cashier, squirt game, and change-maker, DiPeso can get by for now with mostly family.

“Nobody ever comes in looking for work,” says DiPeso. “It’s inconceivable what’s going on here.”

Across the Boardwalk, though, the giant Morey’s Piers, which hobbled through a difficult summer in 2020, has sounded the alarm about staffing needs with billboards, TV spots, and wages boosted to $15 an hour.

To entice an elusive seasonal staffer, Morey’s is offering flexible hours, free rides, and discounts for friends and family of the employees, in addition to housing.

Denise Beckson, vice president of human resources at Morey’s, says the amusement giant has hired about 600 people for the summer, and needs to ramp up to 1,500. They’ve got 560 international students waiting to get their J1 Visas processed, with Turkey, Jamaica, and Taiwan the most common countries of origin.

Along with boogie boards, and building lumber, there’s still a backlog of visa processing in embassies that make that employment pool that usually shows up from other countries uncertain, she said. 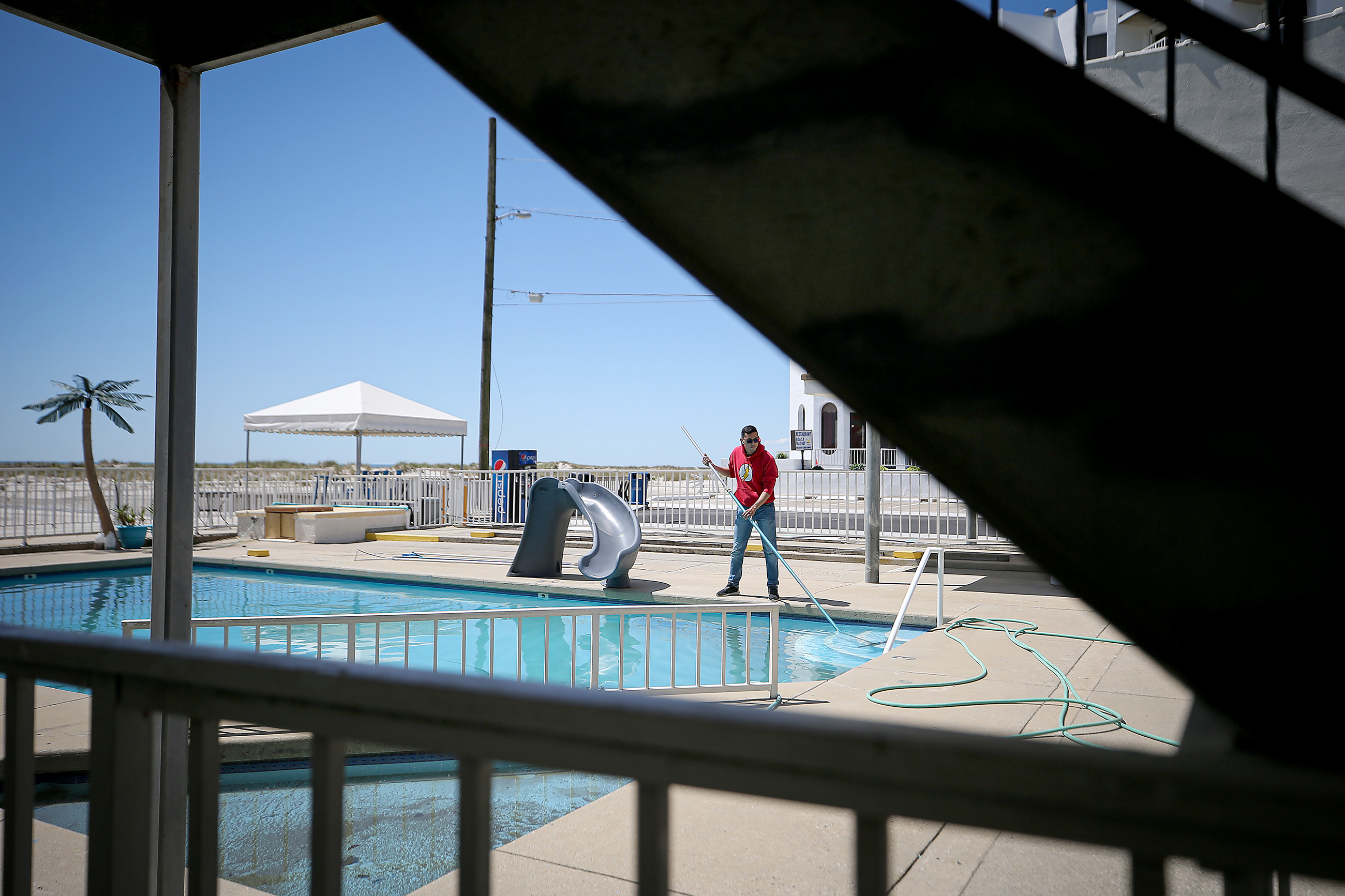 Javier Salinas cleans the pool at the Concador motel in Wildwood Crest, N.J. on May 13, 2021. The owner of the hotel who didn’t want to give her name said they are fully booked over Memorial Day weekend.

Morey’s also recruits at area high schools, partnered with the Puerto Rican Chamber of Commerce, and reached out nationally through uLoop, advertising housing and jobs to two million college students in states like Wyoming, Mississippi, and Alabama. Just 350 clicked on the posts, and only three applied, she said. “None responded to a request for an interview,” she said.

She does, however, have about 80 workers coming from an agency composed of former employees of cruise ships, who will bring a performance element to their duties as ride operators and ice cream scoopers, she said. Stay tuned. 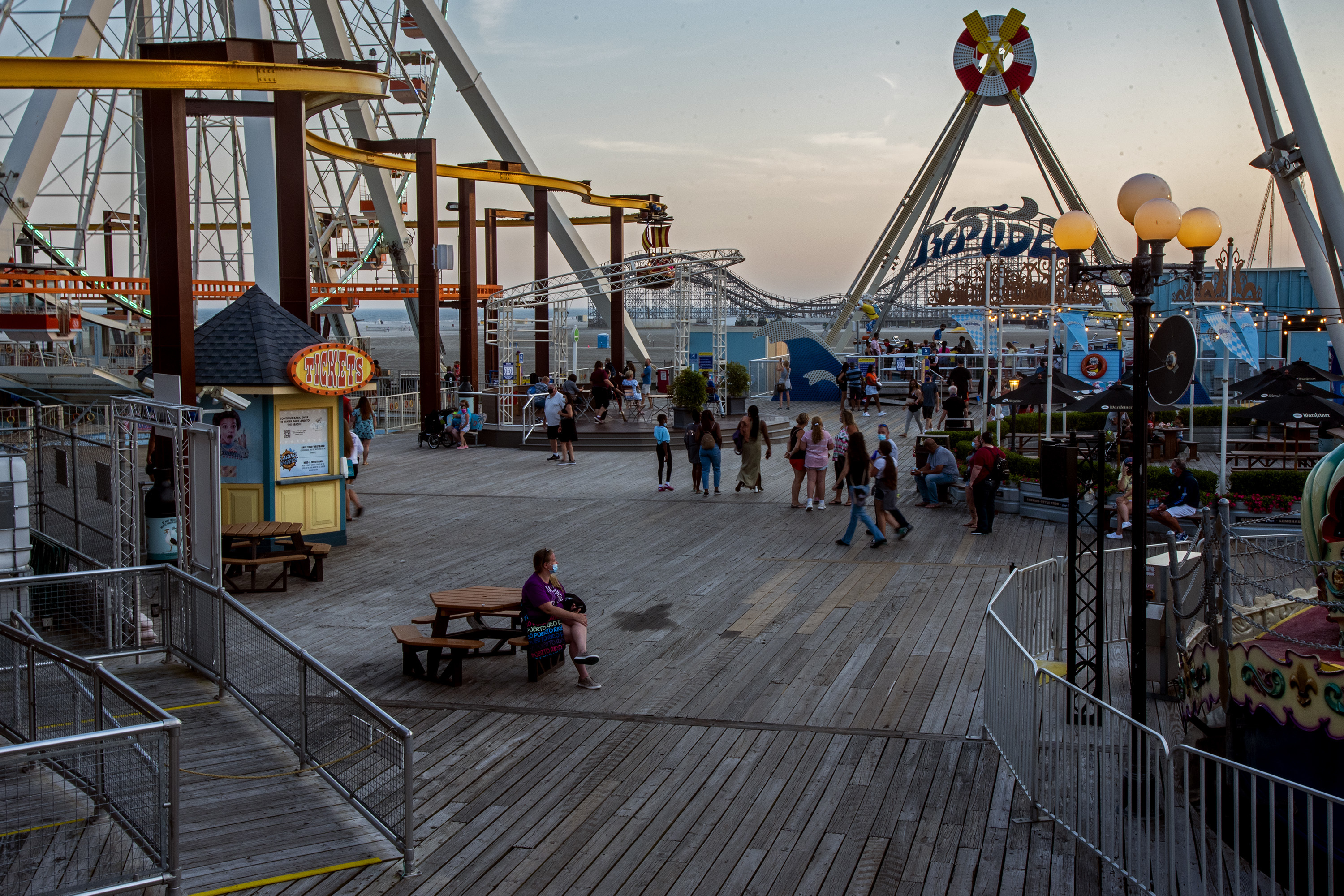 The crowd is lighter than usual on Mariner's Pier on the Boardwalk in Wildwood Aug. 11. 2020, one of the Morey's Piers operating during the coronavirus pandemic of summer 2020. This summer looks to be busier for Morey's, assuming they can find enough employees.

Wes Kazmarck, who owns Ocean City’s Surf Mall and other stores, says business owners were eager to get back to “normal problems” after last summer. Now, with supply and labor problems, it’s “Be careful what you ask for.”

“We’re scrambling,” he said. “I’m faced with tough decisions every day. Do I open all my stores? Do I want to be the cashier? If I don’t do that, the store doesn’t open.”

In addition, he said, he’s been informed that “containers of boogie boards and beach chairs may not be here until September.”

Three-month wait for a fryolator

Oliver Cooke, an economist at Stockton University, thinks the staffing concerns will mostly ease in time for Shore business owners to capture the wave of tourists, some of whom may have sat out last summer, now freed at last from “lockdown fatigue.”

Speaking at a Stockton forum on the Jersey Shore economy, Cooke noted that the extended benefits cited by some employers as discouraging workers also puts additional money into the economy, which helped to boost business last summer.

”The extended benefits are a double-edged sword,” Cooke said. “To the extent it does discourage folks from job searching … the amount of money has been supportive of consumer spending in a very trying year.”

Kelsey Jackson, owner of Kelsey’s Soul Food in Atlantic City, cited several of his cooks who are sitting out full-time work to keep their benefits. With the green light on Sunday buffets, and bar seating for happy hours, this summer looks to be busy, he said. In addition, the popular tent in the Kelsey’s parking lot will return for outside seating, he said. Waits for a seat at Kelsey’s had been stretching to more than an hour before restrictions were lifted, he said.

In Cape May, Curtis Bashaw, the owner of Congress Hall, purchased an entire hotel to provide employees with a campus vibe for housing. One group was recruited from Punxsutawney, Pa., he said.

Like other business owners, Bashaw has plenty of issues even with restrictions mostly eased.

“There’s a three-month wait for a fryolator,” Bashaw said, of the commercial french fry appliance. “Fishermen are not out in force. Crabmeat and flounder prices have gone way up.”

“This has been very, very hard on small business owners,” Bashaw said. “There’s fatigue. You made it through the pandemic, OK, and now to have other curveballs. My sense is this is going to settle. It’s like any traumatic event, there’s post traumatic repercussions.”

Diane Wieland, director of tourism in Cape May County, noted at the Stockton forum that while overall tourism was down 36% in 2020, Shore counties saw a drop of 21%. “The beach towns fared well,” she said.

Without Canadian tourists, she said, county tourism officials tightened their marketing reach and drew in new regional tourists, some in RVs and filling the local campgrounds and the soaring Airbnb market. Remote workers leaving urban centers kept the Shore economy strong in what used to be known as the off-season, she said.

At the Exit 6 bar and nightclub on Old New Jersey Avenue in North Wildwood, a street closed to traffic that hosted 2020′s outdoor pandemic sort-of-night life, the hot Shore economy had, indeed, trickled all the way down to the corner seat, where Kevin Burns was nursing an afternoon beer.

Burns said his rental property was booked solid, and one cancellation had even allowed him to boost the rent a bit. Bartender Tom Dougherty said the expectation all around was for a huge summer, assuming restrictions don’t come back.

Noting the web of masking requirements that still remain for indoor activities in New Jersey, he added: “If we’re ever allowed to dance again.”