The Cape May County Zoo is thrilled to kick off the summer season with the announcement of two new small primates born May 13.

According to a release, the zoo announced the birth of cotton-topped tamarin twins born to mother Cordelia and father Tam Tam. This is the second birth for the pair; they gave birth to a single female last August. 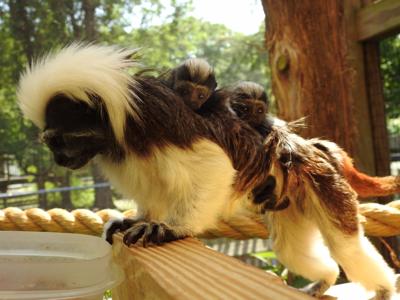 “We have not determined the gender of the twins, but they can be seen with mom and dad and sometimes big sister, Kida, carrying them around every day at the cotton-topped tamarin habitat," reported Dr. Alex Ernst, associate veterinarian at the zoo.

The cotton-topped tamarin is a small, new world primate weighing less than 0.5 kg, or a little over one pound. They are considered "critically endangered," with their population decreasing annually. Deforestation and human activity pose the most significant threat to the survival of the species.

They are omnivorous and eat mostly insects and fruit. They are found in Northwestern Columbia and South America.

“We always look forward to announcing new species to our zoo and encourage residents and visitors to explore all we have to offer. We are especially proud of the work of the zoo veterinarians and the staff in overseeing the breeding of the cotton-topped tamarins, who are included in the Species Survival Plan (SSP), a worldwide conservation effort.

The work our zoo staff does as an accredited member of the American Zoo and Aquarium Association (AZA) has had a great impact on the conservation of animals worldwide. I speak for myself and the full Board of Commissioners in extending a grateful thank you to the staff at the parks and zoo. They work tirelessly to care and protect our animals and have put our zoo on the world conservation map.

We could not be prouder,” stated Commissioner E. Marie Hayes, liaison to the Cape May County Parks and Zoo.