Harriet Tubman Museum in Cape May Gets Statue

Harriet Tubman Museum in Cape May Gets Statue 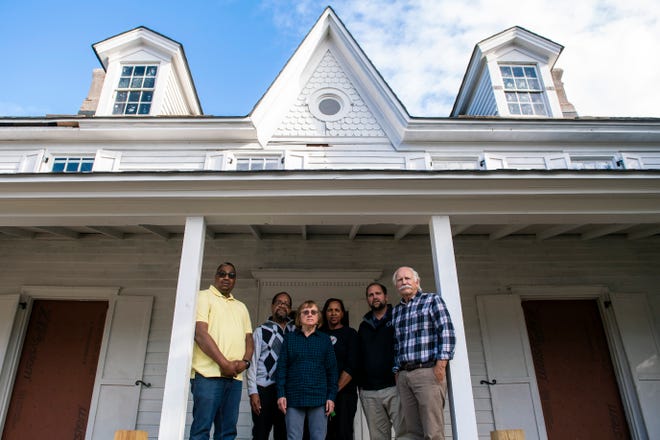 Harriet Tubman arrived in Cape May in the early 1850s to earn money in her efforts to free enslaved people from the south. Her return last Friday morning — in the form of a 9-foot statue — has sparked excitement and anticipation in the community where she once worked as a cook and as a domestic laborer for hotels and families.

The statue of Tubman leading a slave girl to freedom, by Emmy and Academy Award winning sculptor Wesley Wofford, is the first installment of the soon-to-be open Harriet Tubman Museum which on June 29 took a step closer to becoming New Jersey’s official Harriet Tubman Museum after the state assembly unanimously passed a bill. The legislation will next go to the state Senate. 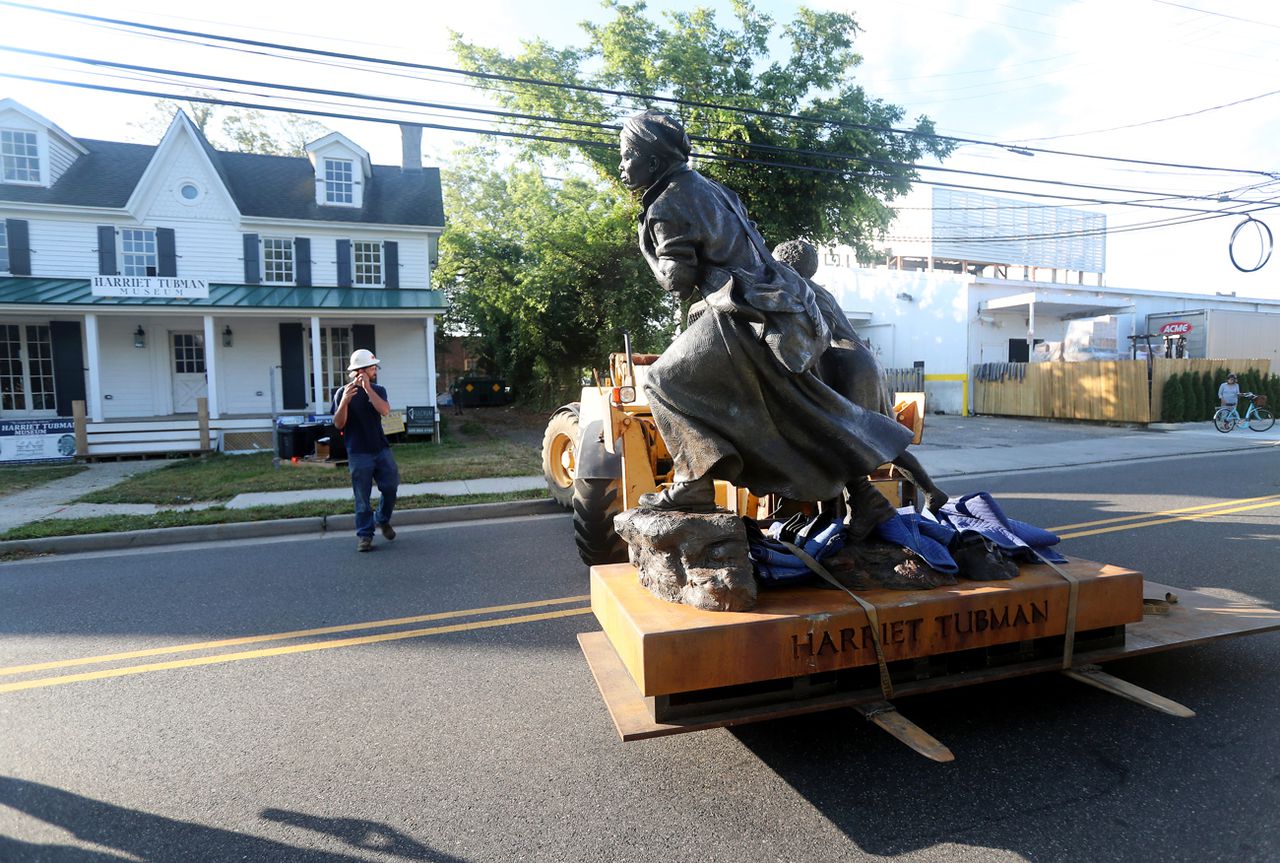 While the arrival of “Harriet Tubman - The Journey to Freedom” sculpture represents the beginning of numerous exhibits and artifacts the museum will install before its August grand opening, the symbolism the piece represents is something that should not be overlooked, said Cynthia Mullock the museum’s executive director.

“Installing this statue in a moment when monuments are such an incredible part of the dialogue in the United States, it’s very clear to us what people you praise as heroes, what spaces you preserve as historic and what dates you celebrate as important demonstrate our values,” said Mullock, referring to how statues of Christopher Columbus and Confederate leaders have been removed around the country. 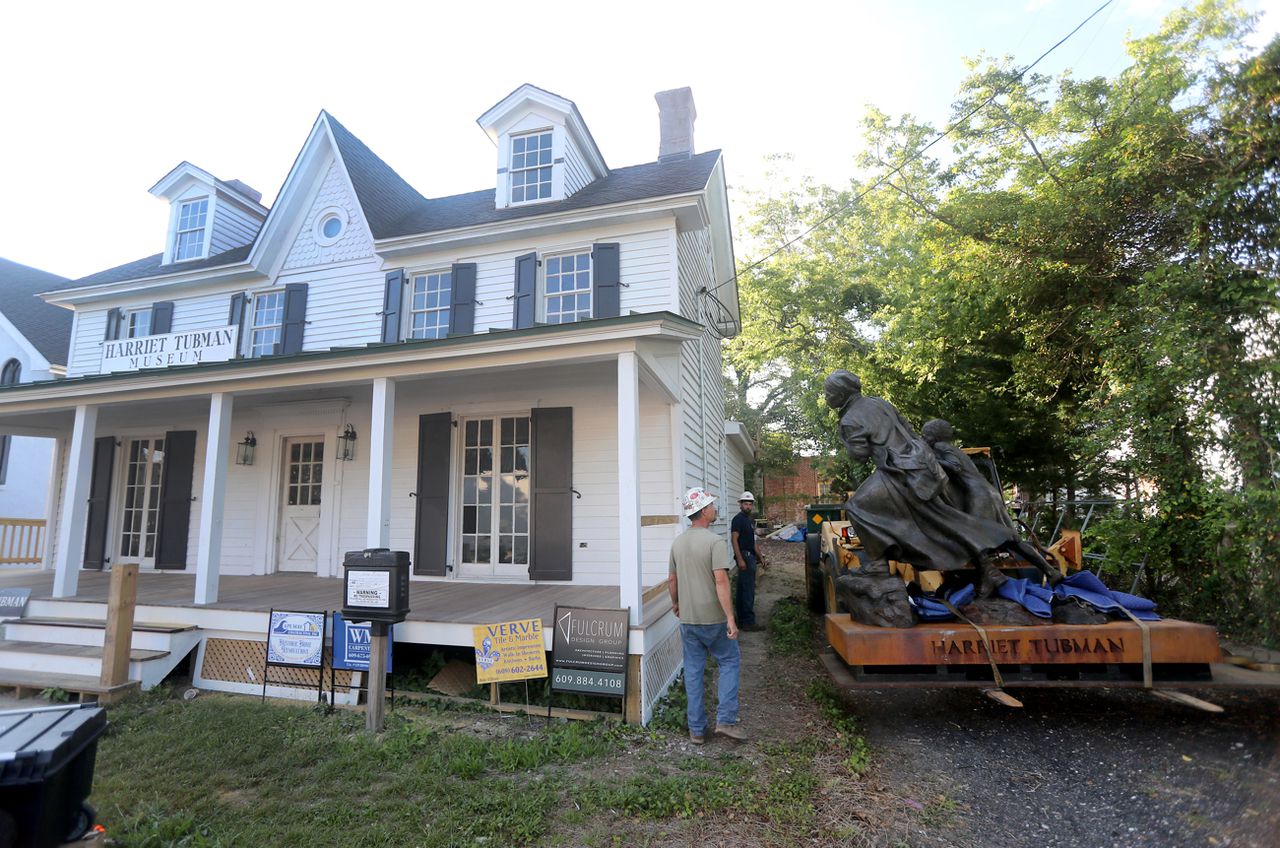 "And so all of that seems to be coalescing in this microcosm of our museum, which preserves a space that's uniquely important to African American History in this community that celebrates a hero of social justice."

The museum celebrated its virtual opening on Juneteenth, the holiday commemorating the end of slavery, which Mullock explained “coincided with the legacy of Harriet Tubman beautifully in her fight for equality and social justice.”

Displayed in the Grand Gallery of the museum, Mullock said that the statue brings the entire project together. 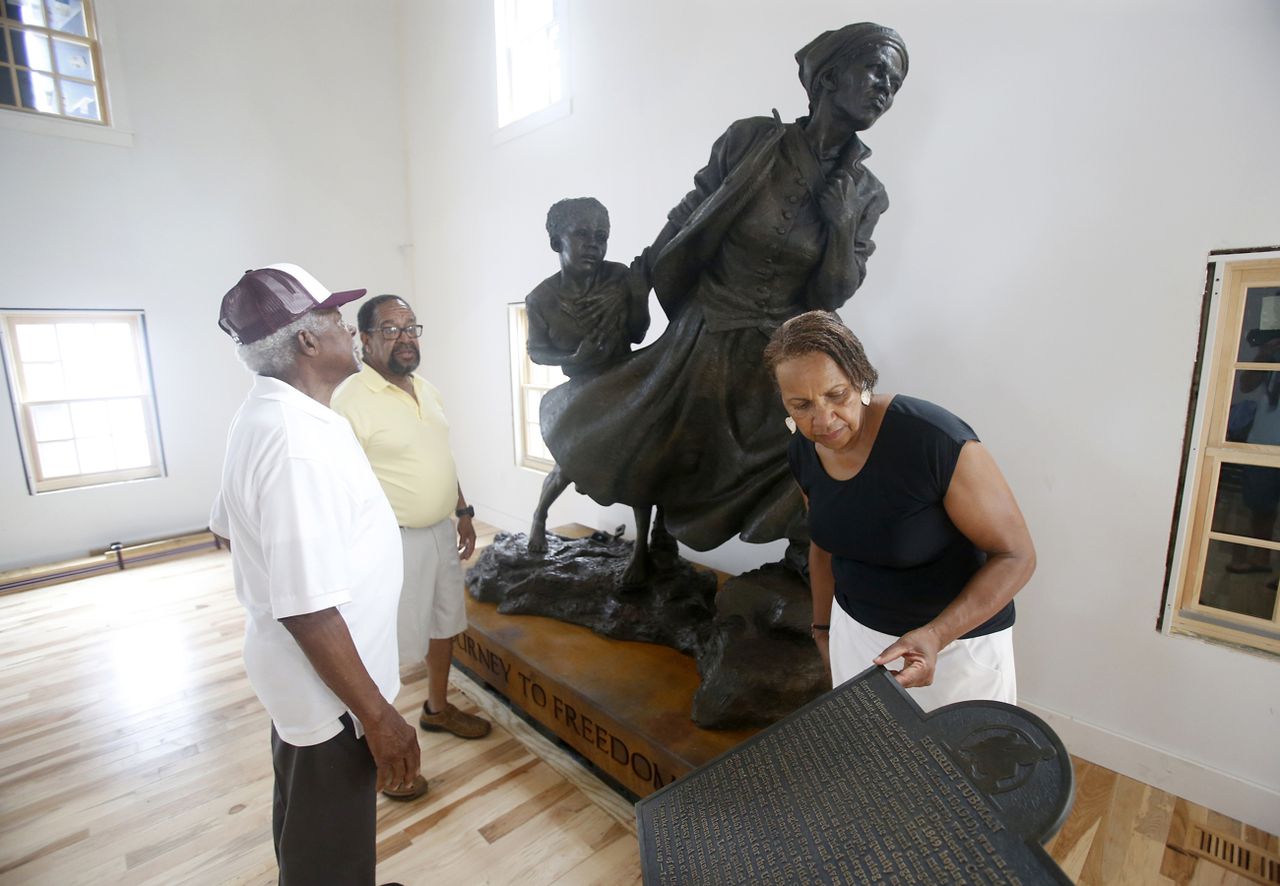 "It feels very real now, especially sitting in front of this remarkable piece."

Bob Mullock, the museum’s chair of the board of trustees, and his staff were instrumental in bringing the statue to South Jersey after seeing the piece online. He first reached out to Wofford to ask him if there was a way to purchase the statue but was told it was a commissioned piece for a family.

After several conversations, Mullock said that Wofford told him he would make a second statue that would travel and that the Harriet Tubman Museum would be one of the venues on the tour.

“It really struck me how he told the Harriet Tubman story in one piece of art,” said Mullock.

"When you look at it, you have the chains that are loosened from the child, the fact that the child is being pulled out of slavery and then her (Tubman's) determination of going forward." 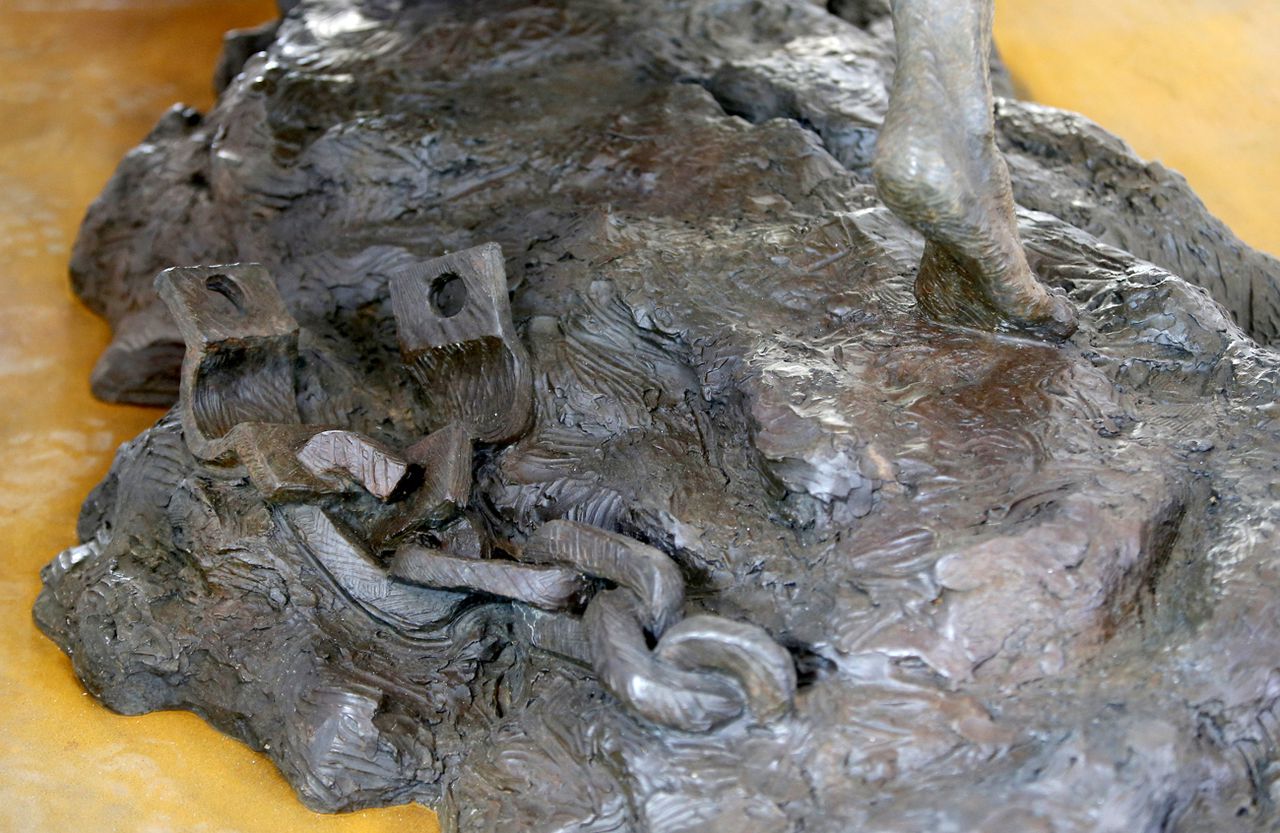 The sculpture arrived in Cape May after being installed in its first venue, the Equal Justice Initiative in Montgomery, Alabama.

Bob said that he thought it was a blessing that the statue traveled from Alabama north to Cape May.

"This is going to be just like Harriet traveling the Underground Railroad all over again."

Inside the museum, Tubman is framed between four windows and is positioned so that it “looks like Harriet is taking the child out of slavery and going right out that door to freedom” he said pointing to the opening she came through. 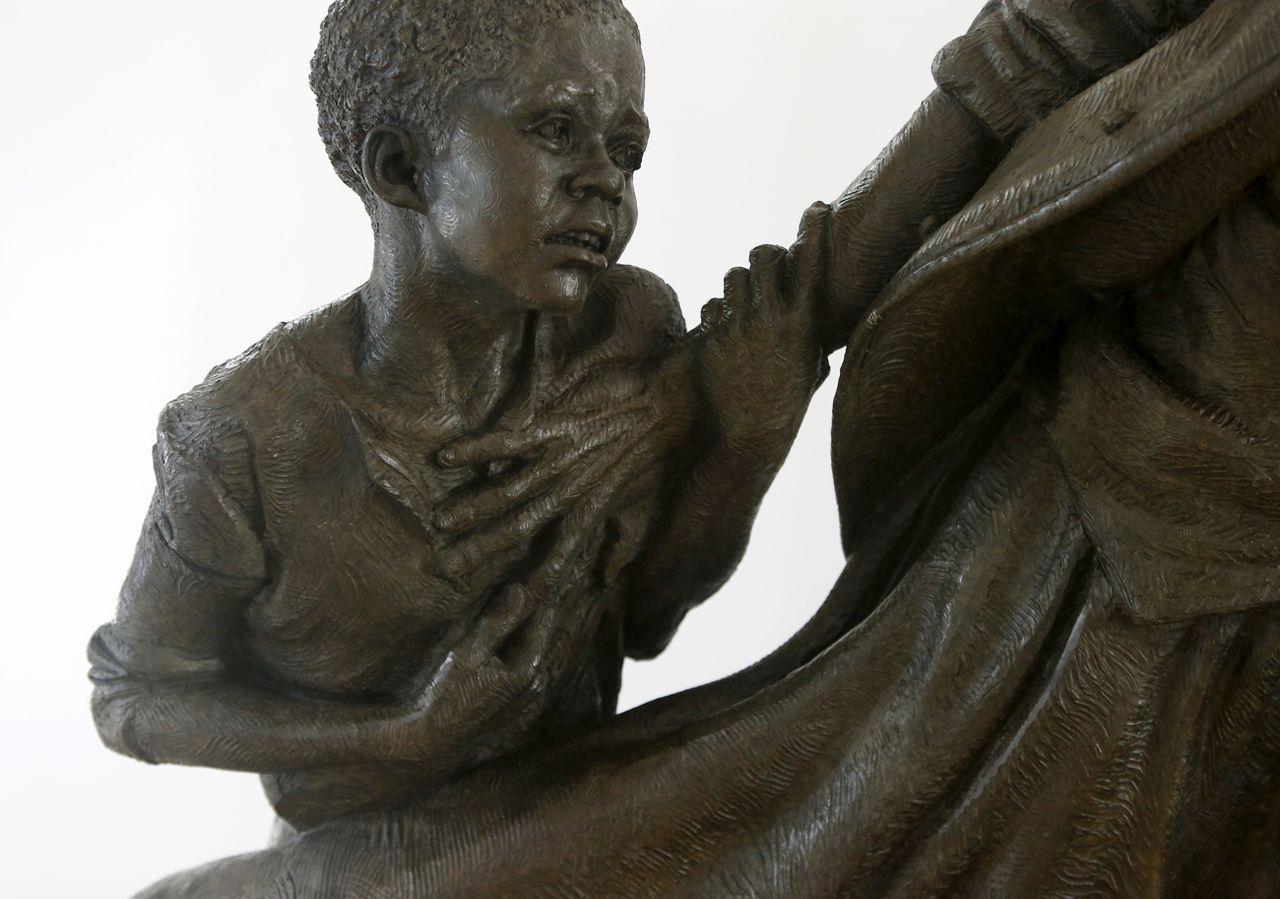 In order to fit the 2,400-pound statue in the museum, a door had to be taken out and the frame cut bigger. Once inside, the piece was turned and put into place with the help of four workers from Garton’s Rigging of Vineland.

Bob credited the contractors for building such a strong base "because this building never cried one iota" after the heavy statue was put into place.

"I never knew that the slaves came through here until just a few years ago," he said while snapping a few pictures of the statue with his phone.

“The detail is unbelievable,” he said. “The artist should be commended.”

For Lynda Towns, the presence of the statue connects her to the true experiences of African Americans in Cape May.

A trustee of the museum and Macedonia Baptist Church Liaison, Towns said that many African Americans came to Cape May to work in the hotels and to work in various restaurants to earn money. And they experienced similar challenges Tubman did, racism and discrimination.

"So when I think about Harriet Tubman and what she experienced as far as racism -- we're still working at it, we're still trying today," she said. "Of course we've moved a bit closer."

She also connected the past to the present as she stood in front of the statue looking at the eyes of the child.

“You can see the dependence on Harriet and that is what young people today feel towards our generation, they’re depending on us to speak, to have a voice.” 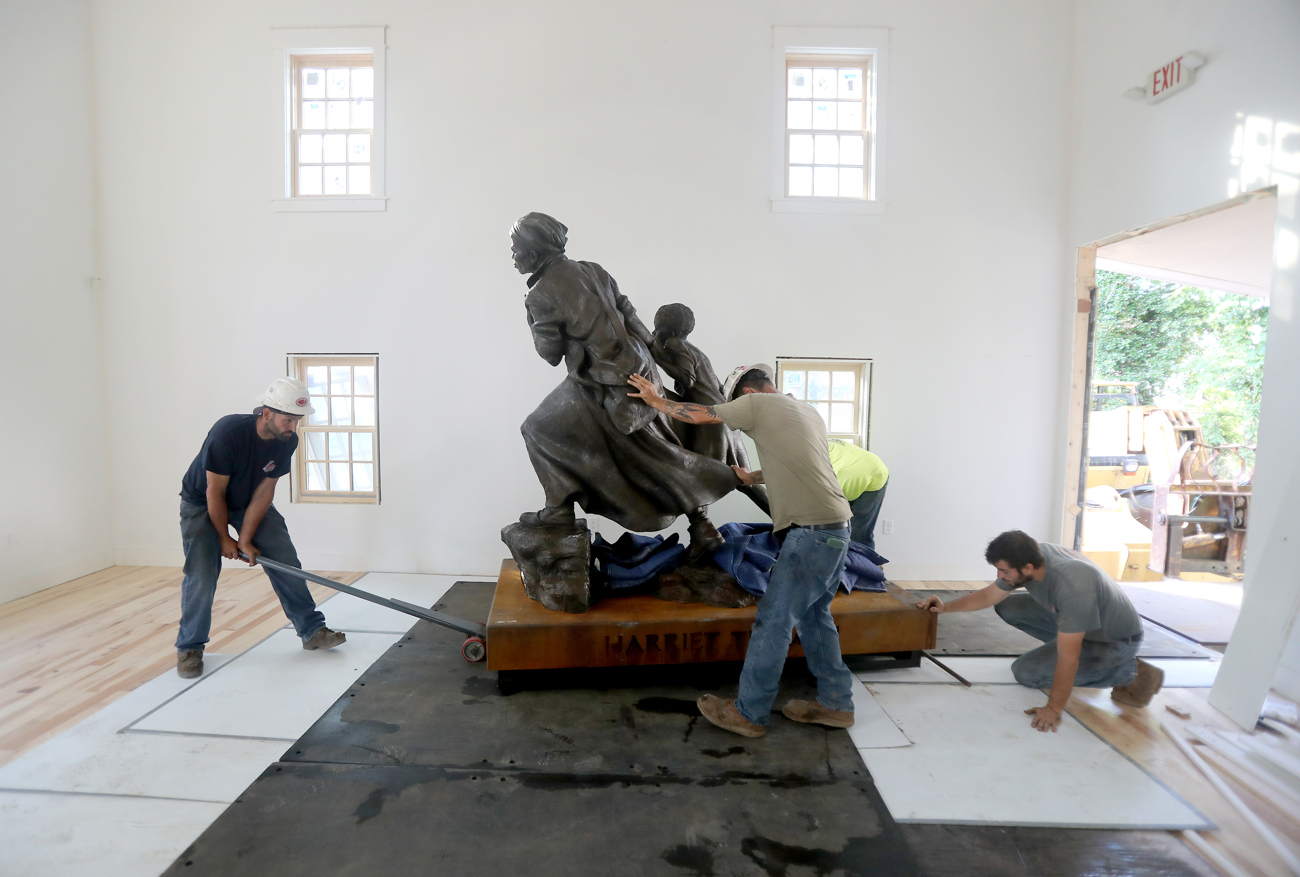 Towns said that through the museum and through the statue, “We have that opportunity to resonate on that same theme that everyone should have the opportunity to work, to live together, to be happy, to go forth and to live with others in peace and harmony.”

Also admiring the statue was Larry Hogan, another deacon from the church. Hogan, an Army Veteran who fought in the Korean War, said that he looks at her as one of our great soldiers and that her history should be told.

“She displayed the valor and the courage and the perseverance to go back into harm’s way to bring her fellow citizens out of slavery,” he said while never taking his gaze off the statue. “We’re still fighting the same type of battle today and with her courage, this is something to give us the spirit and the courage to go on and persevere.”

Hogan said that as a Black American he is very proud to come from a race of people that pressed on to bring them to the place they are today.

“I’m sure this woman never thought that she would be revered as much as she is and we hope as history goes on to educate other people as to what she did,” said Hogan.

Mullock believes that the statue can be a transitional piece for the country saying that there is so much skepticism about who is a hero anymore.

“I think everyone can get behind the fact that Harriet Tubman was a great person, a firm believer in God and is a hero for this country, and for everybody.”