Open floor plan homes—those with no walls separating the kitchen, dining and/or living area—are all the rage today. According to the National Association of Home Builders, 84% of new single-family homes have fully or partially open layouts.

But whether you're thinking of buying an open floor plan home or renovating your way to one by knocking down a wall, you should know both the pros and cons of this setup (because it's not all good news).

A history of open floor plans

Early American homes were "open" by necessity: one or two rooms built around a central hearth. During the Victorian era, however, it became popular for homeowners who could afford it to build many smaller, specialized rooms, from parlors to maid's quarters. Yet as society changed, so did our floor plans. As full-time help became less common and home life became more casual, there was no need for cooks to hide out in the kitchen.

At the same time, new construction materials such as steel beams and advances in heating and cooling technology made big, open rooms more feasible to build, heat, and cool. As Jay Kallos, vice president of architecture for Ashton Woods in Atlanta, points out, "Prewar, before air conditioning, the kitchen was a very hot place, so it was closed off to keep heat from spreading around the house."

Architect Henry Hobson Richardson is credited with first introducing a living-dining room combo in his Paine estate, built in Waltham, MA, in 1886. But Frank Lloyd Wright pushed the open floor plan idea to a whole new level, with homes like the one he built in Hyde Park, Chicago, for Frederick C. Robie in 1909, with a combined living and dining area in one minimalist, free-form space.

Open floor plans may be popular, but they're certainly not for everyone. Here are a few of their challenges. 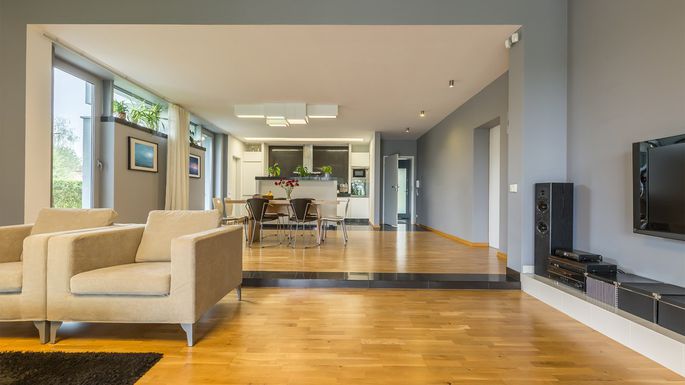