The iconic mid-century Oceanview Motel has been saved from demolition after months of community lobbying.

Madison Resorts, a hotel management company that has restored multiple locations throughout the East Coast and Cape May, purchased the building for $10 million, the company announced in a press release. Madison Resorts founder Dan Alicea stepped in to save the one-of-a-kind doo-wop style motel, built in 1964, which has been closed since fall 2021. 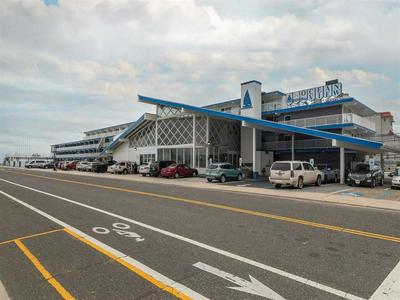 When the beachfront motel was built, it was the largest motel ever in the Wildwoods. The building's architecture, from the lobby to its large blast-off roof, were what members of the Doo-Wop Preservation League, Wildwood Historical Society and the Greater Wildwood Hotel and Motel Association were vocal about saving.

Madison Resorts plans to invest $12 million into renovating and upgrading the motel. It has a tentative reopening scheduled for Memorial Day Weekend 2023, when it will be renamed Madison Resort Wildwood Crest.

The renovated building will include 108 rooms (with 90 suites), beach access, four floors, 90,000 square feet, new lobby/reception, restaurant, lounge area with firepits, ocean view patio lounge and more to be announced. A second phase of renovations will include the addition of a wedding venue that seats up to 250 people, with unobstructed views of the beach with wall-to-wall windows.

This is the second property Madison Resorts has purchased and started renovations on, following the sale of Montreal Beach Resort in Cape May earlier this year.

"We are thrilled to bring the Madison Resorts family to the Wildwood Crest community," said Alicea. "With this purchase, we are excited to be able to help save and preserve such an important piece of Wildwood Crest history. We plan to keep the 62+ year old building and restore it to its retro roots along with modern touches throughout the improvement. Upon completion of construction the new, more all-encompassing property will be rebranded as Madison Resort Wildwood Crest."

Alicea added that the expansion is a homecoming for his wife, Stephanie, who was born and raised in Wildwood Crest.

"We are thrilled that Madison Resorts is taking over this mid-century modern gem and restoring it to its former glory but with the modern amenities that today's sophisticated guests demand," said Doo-Wop Preservation League President John Donio. "Based on our conversations with the new owners, Madison Resort Wildwood Crest will be a Doo Wop showplace and will prove, once again, that today's discerning traveler wants to visit historic destinations that are incredibly unique, and not just another beige box."