How the U.S. Housing Market Was Rocked by COVID-19—and Where We Go From Here

How the U.S. Housing Market Was Rocked by COVID-19—and Where We Go From Here

As home buyers already know full well, the residential real estate market has been on a wild tear for the past few years—and the pandemic has pushed things to new, uncharted extremes. Buyers who had been cooped up indoors for months rushed into the market seeking larger homes in suburban and even remote locations. They were spurred on by record-low mortgage interest rates. And what have those masses of would-be buyers found? A fiercely competitive housing market marked by soaring prices and not nearly enough homes to go around.

So now everyone wants to know: What's going to happen with housing in 2021?

Even as COVID-19 vaccines become more widely available and more homes go up for sale, buyers on a tight budget may not get much of a break this year. Those basement-scraping mortgage rates, which put more expensive properties within reach, are beginning to rise again.

And while higher rates are expected to slow the out-of-control, double-digit price growth the nation has experienced over the past year, home prices are predicted to continue rising in most metros—albeit at a slower pace.

"The very nature of the pandemic, through the health implications, social distancing, and need to isolate, has really brought a central focus on the importance of home for most Americans," says George Ratiu, senior economist at realtor.com®. "In a sense, it has elevated real estate markets as a centerpiece of our lives."

But this newfound obsession with homes has created severe stress points, Ratiu says. "Even with more sellers coming to market, we are undersupplied on the new homes front significantly."

Still, there may be hope for some normalization on the horizon. While prices aren't expected to come tumbling down, experts believe the market will loosen up a bit. As more people are vaccinated and can socialize again, more sellers will feel comfortable listing their homes. And, just maybe, buyers may no longer be pressured to do things that over a year ago would have seemed ludicrous: waiving inspections, agreeing to pay closing costs, and sometimes buying homes across the country via video calls, sight unseen.

Frenzied, take-no-prisoners bidding wars might even quiet down into mere skirmishes.

This could all lead to an increase in home sales. Sales dipped in the early months of the crisis as stay-at-home orders were issued across the nation, but began picking up again in May. From May to July, the number of completed home sales jumped from a little more than 307,000 to nearly 500,000. They dipped in the fall heading into the holidays as buyers paused their searches and whatever inventory was left on the market seemed to shrivel up. As more homes come onto the market, sales will likely rise. But buyers shouldn't get their hopes up too high.

“The market may provide a few more opportunities toward the end of the year as the vaccine rollout really hits people across the country and the world goes back to normal,” says Ali Wolf, chief economist at building consultancy Zonda. But that doesn’t mean buying a home will be easy. “Scant inventory is definitely here to stay for the spring selling season.”

So let's take a deeper dive into what led to this unprecedented, fast-moving, thrill-a-minute real estate market—and  how it's likely to play out this year. Buckle up! 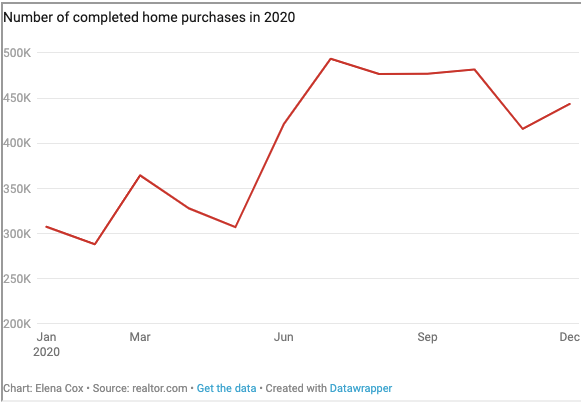 You can’t talk about what’s happening in the housing market without talking about mortgage rates.

In early March 2020, before the rest of the world knew exactly how bad the pandemic would become, the Federal Reserve agreed to cut interest rates in order to stave off an economic disaster. It was the first time the Central Bank had made such a move since the 2008 financial crisis. At the same time, investors became spooked from the uncertainty of a looming global health crisis and, predicting a crash, pulled out of the stock market.

What resulted was the lowest interest rates we’ve ever seen. By July, the 30-year fixed-rate mortgage—the most common for new homebuyers—had fallen below 3% for the first time since the 1970s.

“People started running the numbers of how much it costs to rent versus buying a home,” says Zonda's Wolf. “Low interest rates made buying a home a really viable option for more people.”

With interest rates so low, savvy buyers moved quickly to lock them in. That increase in demand depleted already slim inventory and pushed up prices to new highs.

Rates have since begun to climb, hitting 3.09% for 30-year fixed-rate mortgages in the week ending on Thursday, according to Freddie Mac. They're expected to continue rising through 2021, eventually hitting at least 3.4% by end of the year, according to the realtor.com economics team. That could price out some buyers as well as slow the double-digit home price growth that has become a hallmark of the pandemic.

"People are beginning to realize that rates are on their way back up and they’re no longer searching for the bottom," says mortgage broker Rocke Andrews, of Lending Arizona in Tucson, AZ. "It’s created a rush of activity." 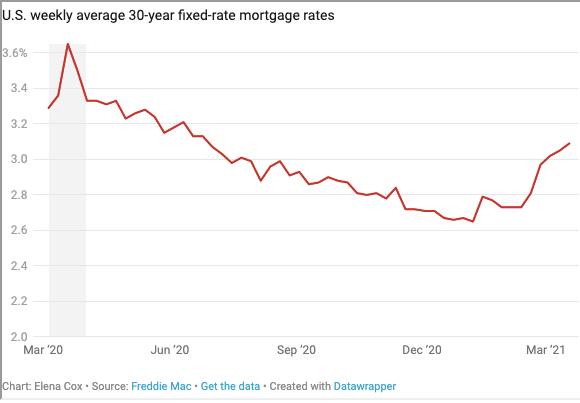 Before the coronavirus upended the world, the nation was already suffering from a severe housing shortage.

At the beginning of the year, the number of active listings hovered above 1 million. By April that number began to plunge as buyers scooped up whatever inventory there was. Meanwhile, sellers, especially older ones or those with preexisting conditions, were afraid to put their homes on the market and have strangers in their homes during a global pandemic. Last month the number of homes on the market was nearly halved from where it was a year ago—to fewer than 525,000—the lowest level in years.

“Normally we talk about how many homes are on the market in terms of how many months of supply we have,” Wolf says. “Now we’re talking about weeks in some markets.” 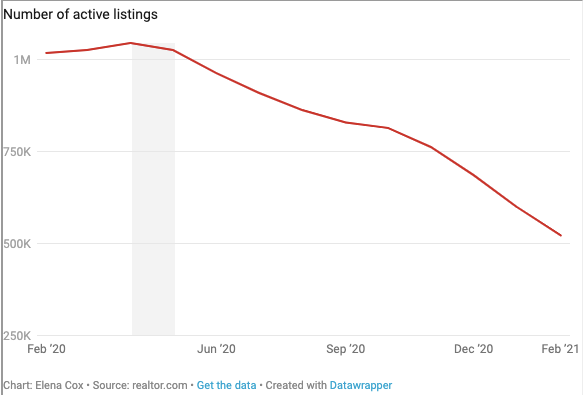 The fear of contracting the coronavirus isn't the only reason sellers have been hesitant to plant "For Sale" signs in their yards. Sellers, of course, are typically buyers, too—and people don’t want to sell their homes until they have another place to live. In a Catch-22, there isn't enough inventory now for them to find new homes. So, even if they want to sell in order to take advantage of the overheated housing market, they're often stuck where they are.

Others have refinanced their mortgages to such low rates that they're choosing to stay put and remodel their way into their dream residences. And some are waiting for prices to hit a peak before listing so they don't leave even a cent on the table.

But buyers may get some relief soon, as sellers become more comfortable putting their homes on the market. In fact, the number of new homes coming to market has already started to increase in the past couple of months, but still far below where things were a year ago.

The number of new listings coming onto the market fell to nearly 288,000 in February nationwide—a 24% drop compared with February 2020, before the pandemic became a crisis in America.

One grim note: Once the foreclosure moratorium ends, homeowners who haven't been able to financially rebound from the crisis may be forced to sell their homes. This could also add to the supply of properties on the market. 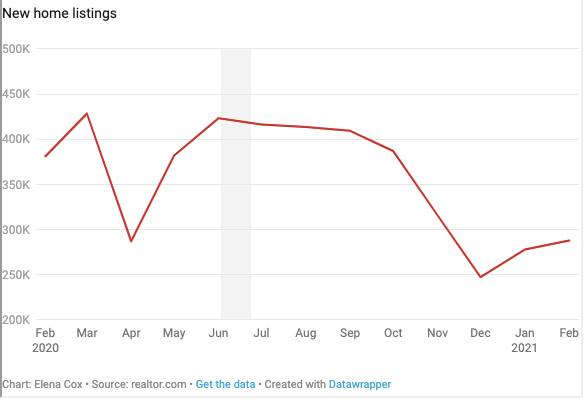 Homebuilders are struggling to keep up with demand

The lack of existing homes was only part of the problem, though. Builders have struggled to ramp up construction on new homes, particularly the most popular single-family models. A lack of available land and skilled construction labor, soaring lumber and materials costs, and cumbersome laws have stood in the way of more new homes coming online to ease the housing crunch.

What buyers wanted also shifted during the pandemic. It became all about extra square footage for home offices, gyms, and schooling areas for the kids—which were all more readily available outside of the big cities.

“Buyers suddenly wanted [to live in areas with] lower population density, lower costs, and markets with lower restrictions,” says Robert Dietz, chief economist of the National Association of Home Builders. “The markets that grew the fastest were medium-sized suburbs.”

In order to keep up with demand, homebuilders began ramping up new construction starting in April and early May. By January, the number of new home starts rose by more than 76%—from an April low of about 1 million to 1.9 million. (A decline in February was mostly due to unexpected snowstorms in the South last month.)

But even that jump wasn't enough to sustain demand, and new homes have become about $24,000 more expensive thanks to lumber costs skyrocketing nearly 200% due to Canadian tariffs.

Looking ahead, Dietz says the pace of construction of single-family homes may start to cool off, but construction should still expand in 2021 due to continued demand.

“The acceleration we’ve had is not a sustainable pattern, but it will still continue to grow because we simply do not have enough housing in the United States,” Dietz says. 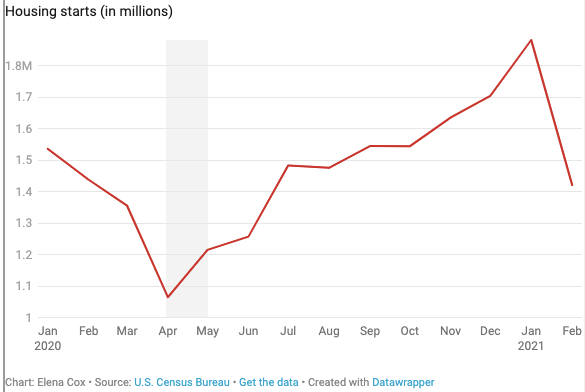 Home prices will continue rising—just not as fast

It doesn’t take an economist to realize that overwhelming demand (helped by record-low mortgage rates) plus a dearth of homes on the market equals skyrocketing prices. Prices had already been rising over the past few years, but by April, things began moving at an accelerated pace.

From February 2020 to February 2021, the median listing price in the United States jumped from $310,000 to $352,500—an increase of almost 14%! While a boon for sellers, that kind of meteoric rise hurt buyers whose incomes weren’t growing at the same pace. Some perspective: The national median family income rose just 4% from 2019 to 2020, according to the U.S. Department of Housing and Urban Development.

At the same time, buyers from ultraexpensive cities like New York City and San Francisco who could suddenly work from anywhere with a stable internet connection entered less expensive markets. And you guessed it: That pushed up prices in those markets, too. In some cases, way up.

This phenomenon caused some longstanding local residents to be forced out of their markets where they were hoping to move from renters to homeowners, or looking to trade up their homes—or even downsize.

“This shift does pose a risk to someone born and raised in the area, especially if they don’t have the same salary, or the same wealth built up,” Wolf says. “It’s creating its own version of winners and losers, because of how high these relocation buyers can push prices.”

In the end, sellers will continue to have the upper hand in 2021. Home prices are expected to hit newer highs as demand remains strong and inventory continues to be tight. More inventory hitting the market will also take some of the pressure off, but not a lot.

Not this year, anyway.